A RAID 0 can be created with disks of differing sizes. However, it is recommended to use hard disk drives of the same capacity and performance. The storage space added to the array by each disk is limited to the size of the smallest disk. For example, if a 500 GB disk is striped together with a 750 GB disk the size of the array will be 1000 GB. When the data is striped over two disks (or more) a single file can be located on both disks. The stripe/block size usually ranges from 8Kb – 512Kb although we have experienced a number of RAID 0 arrays with a 1kB stripe. As such it is necessary to make a recovery of all disk drives to allow a full recovery of the RAID 0 array. There is no upper limit to the total number of disks in a RAID 0 array. In 2016 CDR received a 12 disk RAID 0 using 4000GB HDDs, storing nearly 43TB of data. 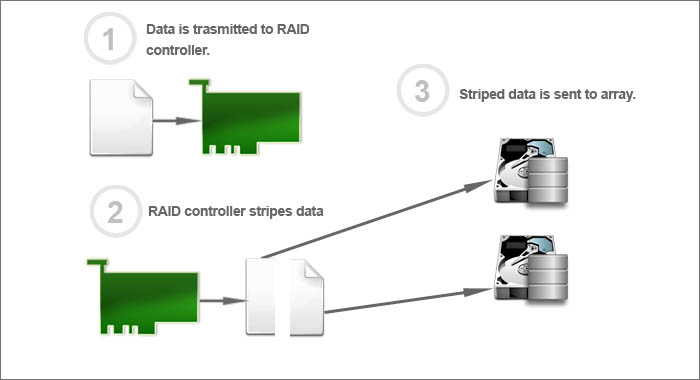 Typical use of a RAID 0

We have had a number of customers who have not been aware that their external hard disk drive or desktop PC has actually been running a 2 Disk RAID 0. A small number of desktop PC manufacturers (e.g. Dell) sold Windows PCs in the 2005-2009 period with twin hard disk drives in RAID 0. This was at a stage when RAID hardware controllers were being integrated into motherboards cheaply and the cost of storage was relatively cheap versus the overall capacity. This practice is very rare now as hard disk capacities have increased significantly since 2009. However, with the introduction of solid state disks (SSDs) since 2010 we now see RAID 0 configurations using multiple SSDs.

There are still a significant number of external hard disk drives in a RAID-0 setup. These include devices made by LaCie (Bigger Disk and Little-Big Disk) the G-Tech range including mini-portable hard drive.

Why use a RAID 0 Striped array?

The motive for those which have actively configured a RAID 0 is performance. Unfortunately, the more disks which are added to a RAID 0 the less reliable the storage becomes. This is because even if one disk fails, all the data will become inaccessible. RAID 0 by itself is not recommended as a storage method. We find that any performance gains are minimal. However, reliability is significantly reduced, with a much higher opportunity for data loss.

What services can CDR provide?